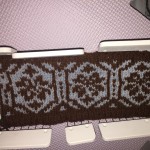 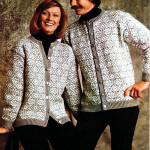 In 1969 I spent the summer traveling in Europe, by myself. I had convinced my parents that attending five weeks of summer school in Oslo and the remaining six weeks traveling  by myself with a backpack constituted a “structured” and “supervised” traveling experience. While in Oslo I met the man who was to become my first husband. After the summer I returned to NYU, graduated early, and in January (January? In Norway? Young love, and that is my final word on that subject) I returned and we lived in Bergen on the west coast. There I found work at the Bristish Embassy and discovered the joys of knitting with two colors.

i was struggling with tangled balls of yarn trying a stranded pattern when an English friend, living in the same dorm, mentioned that his Norwegian girl friend knit a lot of two color projects and never had tangles.  I ran up to see her, and immediately saw tthe solution: one color in each hand, one ball of yarn on each side of her chair.  I have since modified my hold for two colors, but that first project never tangled.

Then I chose a pattern from Dale, traditional lice on the body and snowflakes on the yoke. The prospect of knitting 12 inches of essentially solid stocking stitch for 12 inches didn’t please me, nor did the the idea of knitting snowflakes. I hate snow.

Going through boxes of old patterns books and leaflets I came across Meldal by Peer Gynt yarns.  It is out of print but available for free on Ravelry.   Two colors, no snowflakes, no lice, and pleasing vertical lines.  So I swatched, on US 4 needles.  Because I had lots of yarn (and a bit more coming from Schoolhouse Press) I did a swatch in the round, with steek stitches, and 3 full pattern repeats. I also wanted to test out steeking the Blackberry Ridge to be sure it would hold together. Swatched, crocheted the steek, cut it open, washed and blocked.  Did some math using Elizabeth’s percentage system modified for an ample fluffy body, and fussed with the pattern repeat to fit the number of stitches I needed and to balance the pattern so it mirror-images itself at the fronts.  I will be casting on and knitting the rib flat, then I will cast in the steek stitches and motor on up to the armhole.  Dropped shoulders are not a great look on me so I will do a modified T shaped armscye.  The journey will continue.